William and I spent our first Thanksgiving as married folks with his family in Tyler and at the farm in Pittsburgh. We had a great time celebrating with family and I enjoyed learning a few new family traditions from William's side.

For example, William's mom's family had a tradition of having a glass of "Cold Duck" to kick off the thanksgiving feasting. Here's Meredith and I with ours (fyi, Cold Duck is a sparkling wine that was believed to be an expensive thanksgiving treat until Will's mom discovered it was $2.50 a bottle) 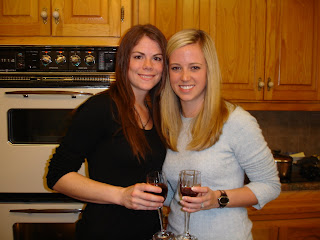 William's mom made a "California-style stuffing" using water chesnuts and mushrooms, which was delicious! She asked me if I knew how to make gravy, so that was my assignment for the meal prep! Here's me making gravy (although you can't really see the gravy...just my face!) 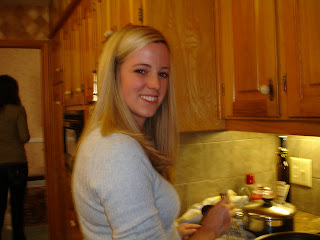 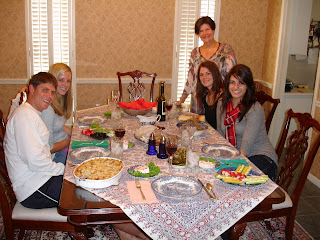 I also contributed a couple of pies to the meal (and, was very proud that I even made my pie crusts from scratch! Thanks Mom!) They were a big hit with the Moharer and Spencer families throughout the weekend!

We left Tyler on Thursday evening and headed to the Spencer farm in Pittsburg. We spent the rest of the weekend hanging out at the farm with Williams Dad, Aunt, 4 cousins, their 6 kiddos (all under age 10) and 8 dogs!! It was definitely a full house and there were plenty of funny stories and good times had. Unfortunately, I didn't take any pictures at the farm, so I can only tell you that we had a blast!!

Saturday, we packed up and headed back to Dallas to meet my family at Cowboys Stadium for the Tech vs. Baylor football game. Since my mom and dad went to Tech and my bro and I went to Baylor, it's a fun family rivalry that we've started to attend pretty regularly. William was a trooper and came to cheer on the Bears/Raiders despite having gotten up at 4am for three days in a row to go duck hunting! He did NOT, however, wear the green BU shirt I laid out for him. Instead, he wore neutral gray (see pic below) 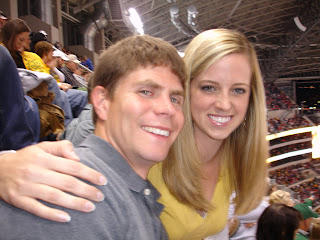 Even though the Raiders got us in the end, it was a great game and the Bears made a good showing in Arlington. The Bears have played it down to the wire against Tech the past couple years...I think next year's our year to finally get the win. Here's a pic of our house divided... 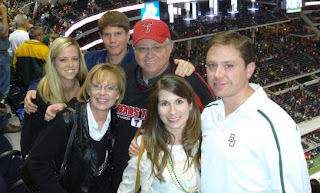 I know this probably won't become a regular thing, but it was amazing to get in a little bit of time with all the families that William and I represent over this quick holiday weekend. We love them all and have such a great time with each of them. It was a great kick off to the holiday season and to celebrating as a Spencer! Love to all that helped make our first Thanksgiving a great one!
Posted by Tami Spencer at 2:28 PM No comments: 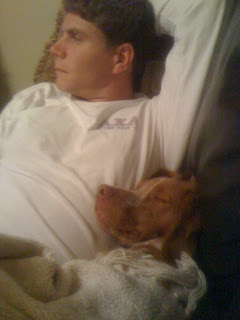 Yes, that's Berkley asleep on her back snuggled up next to William and covered with a blanket. Pretty cute, and funny. She would have a hard road to adjustment if she wasn't our "only child."
Posted by Tami Spencer at 12:30 PM No comments:

Not too long ago, the words “tweet” and “twitter” were associated with things such as birds, Jackson 5 songs, the sound a whistle makes…etc, but most people today, when asked to do a word association with “tweet” would say the first thing that comes to mind is the popular social networking site Twitter.

I was recently pushed onto the bandwagon of creating a twitter account by someone in my company. We are trying to create a following on twitter for the Pro Football Hall of Fame Texas vs. the Nation Challenge (@TexasvsNation, if you’d like to willing jump on our wagon). I was scolded for not having a twitter account and supporting my company and the game that we are all so proud to be a part of. (I guess giving my time, talents and efforts to working for the game and moving to El Paso, Texas for months at a time wasn’t enough to show my devotion to my job, but the twitter account was the final proof of my loyalty.)

I’m surprised to report that I’m not completely addicted to tweeting, twittering twitting… whatever it’s called. I’ve been a member for a few weeks and I think I’m having take-it-or-leave-it emotions towards the site. I have found some interest in following some of my favorite speakers/preachers (@MattChandler74, @JohnPiper, @villagechurchtx) as well as following reports about my favorite sports teams (@BaylorAthletics, @ESPN_Big12)…but as far as following the average person, I really don’t find it that interesting. I also don’t think there’s anything exciting enough in my day-to-day activity to post updates very frequently. I try and do a few updates a week, especially if I’m traveling , but I can’t think of anything that interesting to post every two hours.

If you don’t have a twitter account, I suggest trying it out for yourself. I don’t want to form your opinions for you…if you were a member and following me (@tjspencer09) I guess right now, you’d probably see this message:

@tjspencer09 just posted a pretty boring update on my blog about twitter…
Posted by Tami Spencer at 11:01 AM No comments:

This weekend was Halloween...not one of my favorite holidays but it was going to be a pretty good one this year because William and I were signed up to volunteer at our church's Trunk-or-treat festival. We were on the "entertainment" committee and were in charge of running a game station. Unsatisfied with any of the proposed games, William of course decided we would bring own out for the kiddos to play. Tie-one-on was such a hit among the kids at our wedding reception, we thought that the church visitors would enjoy it as well.

Throughout last week, I found myself fighting off a cough that kept getting deeper and meaner and congestion that did the same. By Friday morning, I was feeling really crummy and finally headed into the doctor for some help. After a chest x-ray, flu test (again) and multiple comments about the "concern" the doctor had for the sounds coming from my chest, I was diagnosed with bronchitis, a relief compared to the speculations of flu and pneumonia that he was throwing around when I first went in. After getting a cortisone shot and prescription for a z-pak, he asked me what my plans were for the weekend. He quickly canceled my volunteer plans telling me that not only would I probably be contagious, I would also have about a 90% chance of catching the flu again if I was around that many kids with my immune system weakened by the bronchitis.

I was bummed as I dressed William up in his funny trucker costume and sent him to man our game station solo, but the weekend did have a saving factor.

No one ended up needing our company season tickets for the Cowboy game this weekend, and since Cowboys Stadium is basically a glamorous, indoor sports bar, (and due to the miraculous effects of steroid shots and Z-Pak's) I decided I would bear the burden and go to the game. My brother, sister-in-law and their brother in-law went with me and we had a blast exploring our new access to the field level club and watching the Cowboys kick Seattle.

William and I wrapped up the weekend with some couch time catching up on the episodes of Flashforward we had missed and eating pizza...my favorite Sunday night activities.
Posted by Tami Spencer at 1:56 PM No comments: