This conversation went down last night after we watched an episode of our FAVORITE show, Friday Night Lights, in bed. William promptly turned off the tv and rolled over to go to sleep. I decided it was a good time to tell William a really interesting story about something we had just seen…

Me: That girl that was the reporter, her name is Emily Jones and she’s from Plainview! She was in high school with my brother and now she’s a fox sports reporter.
Will: I’m trying to go to sleep. Why would you think it was important to tell me that right now?
Me: Because, you’re my best friend. And best friends pillow talk!
Will: That’s what girl best friends do. Guy best friends tell each other to shut up.
Me: I LOVE YOU (laughing)!
Will: SHUT UP!

And that is a glimpse into the beauty that we call marriage. Love my husband so much.
Posted by Tami Spencer at 8:56 AM 1 comment:

My Own Prince William 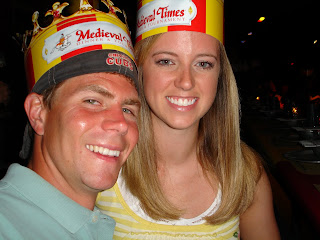 I’m a little late on this post, but I can’t let the “Royal Wedding” go by without remembering that growing up, I used to think about the fact that Prince William and I (or “Wills” as he was called back then) were very close in age…and maybe, just maybe…if we happened to run into each other in the English countryside, he would decide that he would like to make me his princess. Well, THAT William did not ask me to marry him, but another William DID! And these are the reasons I’m glad that I’m married to my prince William instead of that other one-

-He has a full head of hair. I’m not that attracted to balding men and by all predictors, he will have his hair for a long, long time.
-He wears his wedding ring ALWAYS. Even when he’s at the gym, or the lake, or hunting. He is taken and doesn’t mind wearing a symbol to ward off all the other “princess hopefuls”
-I really don't look that great in hats and it seems that royals always have to wear them. I've never tried a diamond tiara...but I'm guessing that would make my hair do strange things also.
-He doesn’t require that I curtsy to his grandmother. I never really liked to curtsy all that much.
-He let me get married in a protestant church in South Texas where I was allowed to wear a strapless dress. Although lace sleeves are lovely, I always wanted to get married in strapless.
-He didn’t make me wait 8 years for a proposal. We knew we were in love after about 18 months so he went ahead and popped the question.
-He lets me split holidays equally between our families instead of having to hop around from one palace with his boring royal relatives to another.
-He doesn’t attract paparazzi everywhere we go, which is good because I go a lot of places wearing workout clothes with a head full of day-old curls which I’ve somehow tied up on the back of my head. Not really magazine ready most of the time.
-He doesn’t have 18 different names or titles. And when I married him, I didn’t have learn to remember a bunch of different names and titles for myself either. This is also a plus in the vows- I would have never been able to remember “I take you William Arthur Louis Earl Spencer”
-I didn’t have the added pressure of over 2 billion people watching me get married on live television. I’m not sure I could have even remembered “I take you William” with that stress.

The only thing that I do “covet” a little bit about marriage to “Wills” is the AMAZING music they had in the ceremony. I would have loved to have a full choir (including a group of young male sopranos) and the most amazing pipe organ in the world to play some majestic sounds as I walked down the aisle, but I had a pretty amazing organist and guitar/vocalist at my wedding too so I guess I’m still happy with my choice(shout out Jenni Lynn and Jared Billups!) All things considered, I definitely think I got the better end of the deal here marrying William Spencer and he tells me that the Spencer’s have some British royals in the family tree so here’s hoping that someday we get that call.
Posted by Tami Spencer at 1:08 PM 1 comment: