Some thoughts have been flitting through my head lately so the most logical thing to do with said thoughts is post them to the internet :) 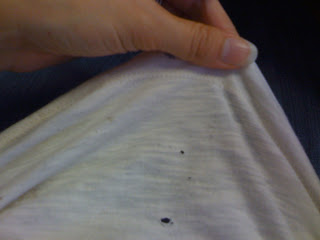 -I can not figure out why ALL of my shirts are getting these little holes in them. Doesn't seem to matter that I don't dry them in the dryer, where they are from, or what material. I thought it was the washing machine but my mom has a fancy new front loader and she said it's happening to her too. I think the quality of clothes must just be declining. I can't afford to replace all my shirts every 3 washes. This needs to get resolved. Any ideas?

-It rained for about three solid days in Dallas. I love the rain and was kind of sad when it cleared up this afternoon except for the fact that people were suffering from major flooding issues. I was relieved for them. When the tornado sirens went off last night, I had a flashback of a childhood memory. I'm standing in the doorway of my childhood home screaming at my family and neighbors to get out of the middle of the cul-de-sac where they all stand watching the sky looking for any sign of "rotation." I had been running back and forth from the basement to the door ever since the emergency broadcast system had informed us to "seek shelter immediately" trying to convince my family that they were stupid for not heeding the weather man's intense warnings. When that didn't work, I told them they were selfish and obviously didn't care if I ended up an orphan because I was only the one who would be spared when a twister suddenly dropped from the clouds without giving us the warning of lots of cloud rotation.

- I made a really tasty BBQ brisket on Tuesday. Slow cooked it for 10 hours until it fell apart when touched with a fork. Last night, at the convincing of Southern Living Recipes, I attempted to use the left overs and create a new "BBQ Pot Pie Dish" that sounded amazing. It called for a topping of instant mashed potatoes with a little Southern Living added goodness. I followed the recipe EXACTLY and ended up with a big pot of "mashed potatoes" that was the consistency of cream gravy. I started thinking about it and decided that little flakes that look like oatmeal shouldn't really turn into mashed potatoes anyway. Can you even consider that a vegetable? What do they even make the "instant potato flakes" out of? Never again, instant mashed potatoes. I've learned my lesson.
Posted by Tami Spencer at 1:05 PM No comments: